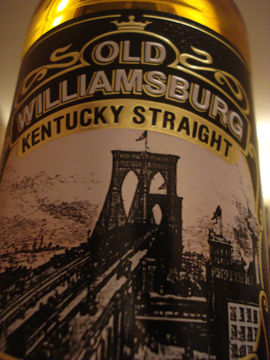 I’ve lived in Brooklyn for nearly four years now, but I’ve never had the occasion to try Old Williamsburg Kentucky Straight Bourbon.  This isn’t much of a surprise since this 80 proof version doesn’t exactly rake in the good reviews.  It is, however, quite cheap and that picture of the Brooklyn Bridge on the label ignites a little local pride (though I have to note that the Brooklyn Bridge does not actually connect to the neighborhood of Williamsburg at all).

I can’t say that I’m expecting too much from this one, but it might have some potential to win in the quality-to-price ratio department given the small denominator in that equation.  Let’s see.

– Bottled by Old Williamsburg Products Co. (who makes this stuff, anyone know?)

Old Williamsburg does not have a bad design.  While the bourbon itself is a little on the sickly yellow side, that actually goes pretty well with the black and gold of the label.  In the center is a print of the Brooklyn Bridge and surrounding it are some standard bourbon descriptors: Kentucky Straight Bourbon Whiskey.  The only flourishes are some gold curls and a small crown atop it all.  This front label, while hardly innovative, is certainly appealing.

The rear label tells us that Old Williamsburg was the county seat for the city of Brooklyn in the late 19th century and requests that we make this our drink of choice.  At the very end, in all caps, they’ve inscribed “THIS WHISKEY IS THIRTY-SIX MONTHS OLD.”  I suppose that might fool some folks into thinking that it’s pretty old, but three years is considered to be on the young side in the world of bourbon.

This smells a bit like car tires on a hot day and wet rope fibers.  There’s some char and a decent amount of corn in there too.

There’s not too much going on taste-wise however.  There’s definitely some asphaltiness, a hint of wood toward the sides of the tongue, and corn, but for the most part it’s just heat and a clean but hot finish.  Not unpleasant, though.

Sadly, I’m impressed with the lackluster performance of Old Williamsburg – I wasn’t expecting even this.  If I were throwing a party and needed something to mix with ginger ale, I might just use OW.  This won’t hit the spot if you sip it on its own, but it won’t make a cheap cocktail into a terrible one.