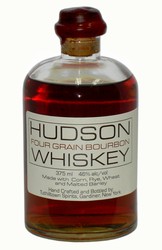 I met Ralph Erenzo – co-founder of Tuthilltown Spirits – at a tasting at Fermented Grapes this weekend. I’ve tasted TS’s barley Single Malt before and I’ve been curious about their Four Grain Bourbon more or less since.  So, after tasting some of TS’s apple vodka and Baby Bourbon (as well as a pleasant conversation with Ralph) I took home a bottle.

As I’m sure I wrote before with the Single Malt, Tuthilltown Spirits squat little bottle with wax-dipped top is attractive for its lack of affect and medicine-bottle look, while avoiding the kitch and nostalgia of other American whiskies.  My only complaint is the wordiness of the paragraph on the back, which belies the rest of the packaging’s simplicity.

Tasting:
On the nose FGB is very muted.  There’s a bit of spicy, pepperiness from the rye as well as a sweet maple syrup scent.

The first sip enters smoothly and sweet, then develops a full-mouth grainy, grassy taste.  It’s here where it reveals some youth though (it’s aged less than a year in small barrels) and a little tartness, but it slowly moves into a medium-length peppery finish.

Over all:
Tuthilltown’s Four Grain Bourbon is pleasantly full.  If I didn’t know it had been aged less than a year (Mr. Erenzo let that out) I probably wouldn’t have been able to guess.  I’m looking forward to what they produce in the future.